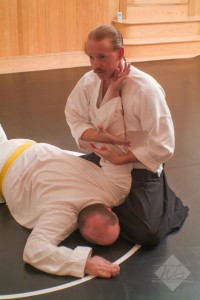 Sensei Todd Crabtree has studied Tomiki Aikido for most of his adult life under Master Mike Stanhope.  He earned his fourth degree black belt (Yon Dan) in 2020.  In 2010, he was asked by tenth degree black belt Don Madden, founder of the Akju Federation to found his own school.  That same year, the Seishin Ryoku dojo was founded.  In addition, Sensei Crabtree became a Usui Reiki Master in 2009. He also works as a professor at the University of Rio Grande as an aikido instructor. In 2014 he began teaching Seiei Kan Iaido and earned the rank of 3rd degree instructor in Iaido in 2021.

Aikido is a Japanese martial art developed by Morihei Ueshiba as a synthesis of his martial studies, philosophy, and religious beliefs. Aikido is often translated as “the Way of unifying (with) life energy” or as “the Way of harmonious spirit.” Ueshiba’s goal was to create an art that practitioners could use to defend themselves while also protecting their attacker from injury.

Aikido is performed by blending with the motion of the attacker and redirecting the force of the attack rather than opposing it head-on. This requires very little physical strength, as the aikidōka (aikido practitioner) “leads” the attacker’s momentum using entering and turning movements. The techniques are completed with various throws or joint locks.